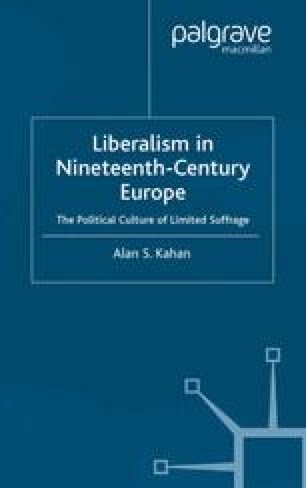 From the beginning, nineteenth-century European liberalism was defined by its contradictions. There were contradictions within liberal attitudes to the past, among liberal ideas about present-day tactics, and even in liberal projects for the future. This is why it has been so hard to define liberalism. Historians have even had trouble deciding whether liberalism should be considered a “left-wing” or a “right-wing” movement — as did nineteenth-century observers. Much depends on how left-wing and right-wing are defined, of course, but to give an example, when the nineteenth-century left and right are described as the confident vs the anxious, liberalism will forever remain in limbo, for the reason that liberals were, by definition, both.1 They were both the confident heirs of Voltaire and the frightened successors of Robespierre.

Political Participation Political Culture Political Discourse French Revolution Liberal Attitude
These keywords were added by machine and not by the authors. This process is experimental and the keywords may be updated as the learning algorithm improves.
This is a preview of subscription content, log in to check access.