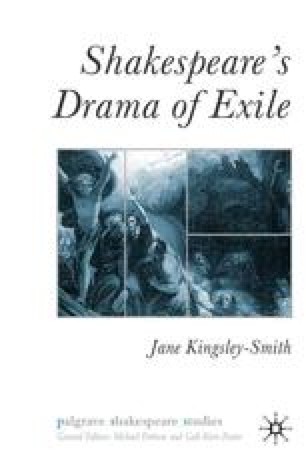 Coriolanus: the Banishment of Rome

Arruntius speaks like an exile. His use of the ubi sunt motif, recalling Anglo-Saxon poems such as The Wanderer, creates a sense of disorientation in Rome. The city may be profoundly familiar — Romanitas is inscribed in the history, rituals, language and architecture of the city — yet no one is Roman. It was inevitable that a dramatist already concerned with the representation of banishment and exile should have been drawn to this Roman setting. To be Roman was one of the strongest cultural identities on the Elizabethan and Jacobean stage and part of its dramatic appeal was the spectacle of its disruption. Alienation was built into the Roman ‘character’: alienation from the achievements of ancestors (particularly fathers), from a glorious historical moment, from a just political system, from the possibility of greatness. Thus banishment was not only a famous punishment in Roman law and a feature of many heroic biographies; it was also a kind of unmetaphoring of the Roman condition. In Coriolanus, we find Shakespearean exile at its most political. The expulsion of a man publicly celebrated as the embodiment of Romanitas symbolizes the city’s adherence to a different value system and paves the way for future innovation while raising important questions about the integrity of Roman democracy. Shakespeare’s historical sources frequently used examples of banishment for political comment. However, in Coriolanus, we are also concerned with the Roman’s alienation within Rome and it is this public and private tragedy that Shakespeare explores through banishment.

City Wall Roman Condition Athenian Democracy True Patriot True Citizen
These keywords were added by machine and not by the authors. This process is experimental and the keywords may be updated as the learning algorithm improves.

Sabinus But these our times Are not the same, Arruntius.

The men, The men are not the same: ‘tis we are base, Poor, and degenerate from th’exalted strain Of our great fathers. Where is now the soul Of godlike Cato? — he, that durst be good When Caesar durst be evil; and had power, As not to live his slave, to die his master. Or where the constant Brutus, that (being proof Against all charm of benefits) did strike So brave a blow into the monster’s heart That sought unkindly to captive his country? O, they are fled the light … There’s nothing Roman in us.