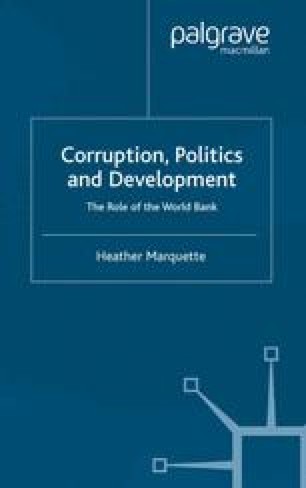 In 1997, the World Bank announced its intention to provide a ‘systematic framework for addressing corruption as a development issue in the assistance it provides to countries and in its operation work more generally’.1 This included: Although the Bank acknowledged that some of these areas were new territory and would require new staff, new areas of expertise, new procedures and new lending instruments, it claimed that it had long been concerned with corruption. Indeed, a recent report asserts that the Bank has been ‘in the business’ of combating corruption, ‘since its very inception.’3

Civil Society Good Governance Authoritarian Regime Bank Lending Legal Reform
These keywords were added by machine and not by the authors. This process is experimental and the keywords may be updated as the learning algorithm improves.
This is a preview of subscription content, log in to check access.