The Political Economy of Emerging Markets 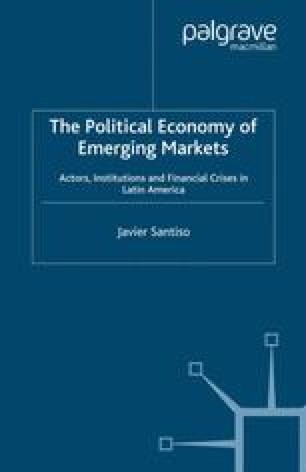 The Political Economy of Emerging Markets pp 146-186 | Cite as

The interaction between politics and economics is central to an understanding of financial crises in Latin American emerging markets. The paradox is that, in spite of the evidence, very few studies have been devoted to an analysis of the links with, and importance of, political variables in the empirical literature on currency and financial crises. One of the reasons might have been the difficulty in formalizing political variables. But whatever the reasons behind this lack of integration of political variables, they are indeed significant explanatory factors of emerging market crises. As underlined by a recent study, structural political variables are significantly correlated to currency crises. Left-wing governments seemed more conducive to currency crises, democracies were in general less vulnerable than nondemocratic regimes and strong governments with legislative majorities and fragmented oppositions tend to be less vulnerable.2

Financial Market Financial Crisis Central Bank Mutual Fund Institutional Investor
These keywords were added by machine and not by the authors. This process is experimental and the keywords may be updated as the learning algorithm improves.

There is no hard rule about the timing of crises. It is surprising how long basically unsustainable situations can be given extra lives, notably if an election is in sight. With an election on the horizon, creditors are willing to believe that much or anything will be done to hold off a crisis or a corrective devaluation. Governments will do anything, including high interest rates or preferably a shortening of maturities and re-denomination into foreign exchange of claims. As a result, crises happen after elections, not before. This is akin myopic political business cycle but no less real.