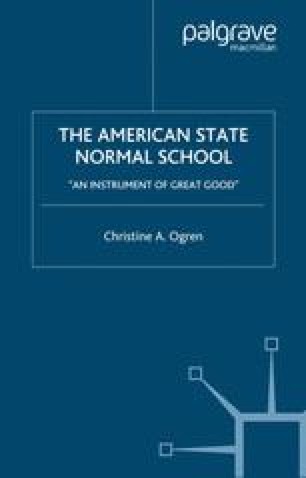 At the beginning of the twentieth century, state normal schools thrived throughout the United States. A century later, most of these institutions had higher stature as state colleges or regional universities, and yet had lost much of their distinctive identity. In November 2000, The Chronicle of Higher Education reported that, as mere “lesser versions of their states’ flagship universities,” many state colleges were again “looking for a makeover.” In such recent discussions of program expansion and name changes at these institutions, reporters and scholars have invoked the term “mission creep.”1 The history of the American state normal school suggests that “mission creep” more accurately characterizes much of the early decades of many regional public colleges and universities, and actually helped to create their distinctive identity. Education reformers of the early nineteenth century and state legislators, education leaders, and normal-school principals of the middle and late nineteenth century intended to establish and maintain single-purpose institutions focused on teacher preparation. After a few decades in which they did little more than instill the notion of teaching as a calling, state normal schools did create a strong professional spirit through teacher-education coursework, observation and practice teaching, and student activities. While teacher preparation remained their official purpose, however, the normal schools were never really single-purpose institutions.

Teacher Preparation Normal School Literary Society Domestic Science Academic Procession
These keywords were added by machine and not by the authors. This process is experimental and the keywords may be updated as the learning algorithm improves.
This is a preview of subscription content, log in to check access.