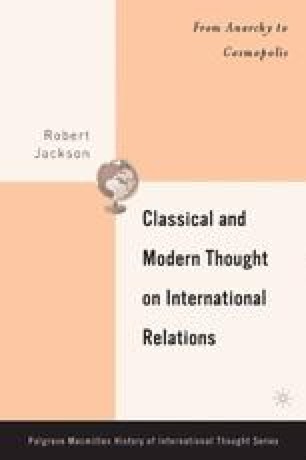 Martin Wight argues, in a celebrated essay, that political theory is a fully developed “theory of the good life,” whereas international theory is merely a residual “theory of survival.”1 Wight’s simplifying distinction may be inviting because it eliminates thorny normative issues and it confines theoretical reflection on international relations to instrumental questions. I shall argue, however, that it cannot be sustained and should be rejected.2 Furthermore, he fails to observe the distinction in his own writings on states systems, which disclose the unity of political theory and international theory.3 International theory and political theory diverge at certain points but they are branches of one overall theory of the modern state and states system. States are janus-faced: they simultaneously look inward at their subjects and outward at other states. Although each facet can of course be distinguished analytically and theorized separately, neither is ontologically independent of the other. There is not on the one hand “the state” and on the other hand “the states system”; there are only “states” whose actions, arrangements, and entanglements can be studied from either the internal or the external angle, or both. Survival may be threatened by internal war. The good life may be fostered by external aid. International theory, understood in Wight’s own terms of “realism,” “rationalism,” and “revolutionism,” proves on examination to be a theory of the good life and therefore a branch of political theory in its own right.

Good Life International Relation Political Theory Modern State International Politics
These keywords were added by machine and not by the authors. This process is experimental and the keywords may be updated as the learning algorithm improves.

All states and nations, even welfare states, have been built by struggle and war.