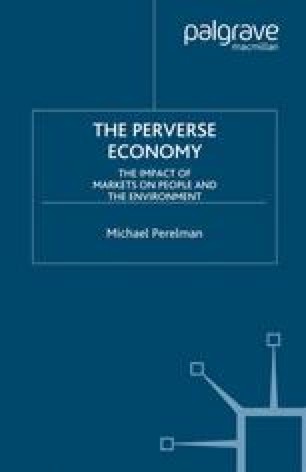 Back to the Farm Worker Paradox

In the early days of economics, or political economy as it was then called, the farm worker paradox hardly appeared paradoxical. The vast majority of economists, prior to and in the early days of the Industrial Revolution, advocated a world in which all but a select few people would work as many hours as possible for a subsistence wage. Women, children as young as three, religious orders, and convicts all appeared as cheap sources of labor power (Perelman 2000a).

Labor Market Human Capital Fossil Fuel Tacit Knowledge Farm Worker
These keywords were added by machine and not by the authors. This process is experimental and the keywords may be updated as the learning algorithm improves.
Download to read the full chapter text