Narrative Bodies: Toward a Corporeal Narratology 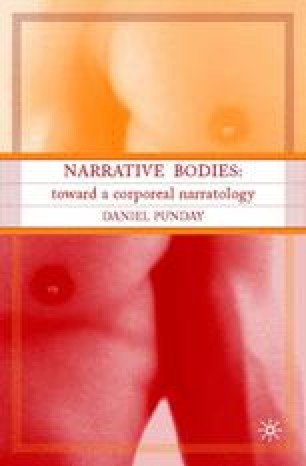 Narrative Bodies: Toward a Corporeal Narratology pp 185-190 | Cite as

At the outset of this book I noted the problem of historicizing narrative bodies. Throughout we have seen that much of the best work on the body in narrative is historicist in nature. Indeed, many of the books that I have drawn on repeatedly throughout this study—Lynch’s work on character bodies, Armstrong on domestic fiction, Gallagher on circulation—might well be considered anti-narratological by virtue of their insistence on the specific historical conditions of the narratives that they are studying. If narratology has traditionally sought universal principles and modes for narrative, then the kind of historical context that I have drawn on so frequently makes this project inevitably hybrid. The question at end of this book, then, must surely be whether this is a productive or disabling hybridity.

Universal Principle Textual Dynamic Early Modern Period Implied Reader Biblical Narrative
These keywords were added by machine and not by the authors. This process is experimental and the keywords may be updated as the learning algorithm improves.
Download to read the full chapter text