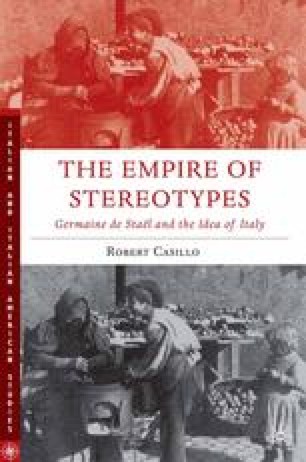 A sign of their unwillingness to content themselves with the pleasures and lessons of Rome as the traditional culmination of the Grand Tour,Corinne and Oswald’s visit to Naples reflects a modification in that cultural itinerary that had first become apparent during the mid-eighteenth century. As Edward Chaney notes, whereas up to that point the great majority of Grand Tourists never traveled south of Rome, Naples enjoyed the prestige of a standard destination from about 1750 onward, when the traveled Englishman became as familiar with the city as he was with Paris in the previous century. Thus the vogue of Naples coincided with the absolute heyday of Grand Tour, which for Chaney extends from 1763 to 1790.1 Sicily as well as other parts of Southern Italy (the Mezzogiorno) also gained in popularity at this time, although they attracted less attention than Naples.2 The more distinguished British visitors to Naples included Joseph Addison, George Berkeley, Lady Mary Wortley Montagu, Thomas Gray, Horace Walpole, James Boswell, Edward Gibbon, Samuel Sharp, Patrick Brydone, Dr. John Moore, Henry Swinburne, Martin Sherlock, and Hester Thrale Piozzi. Their French counterparts included Blainville, J.-B. Labat, Montesquieu, Étienne de Silhouette, de Brosses, Jean-Pierre Grosley, Richard de Saint-Non, Lalande, Duclos, and Dupaty.3 When Staël visited the city in 1805 it had already experienced the revolutionary turmoil of the Parthenopean Republic and its suppression by England, and would soon be under Napoleonic rule. The remaining decades of the nineteenth century held in store for Naples increasing overpopulation and a steady economic and social decline, during which the city lost its prestige as a tourist attraction.

Eighteenth Century Common People Civic Virtue Environmental Determinism Feudal Lord
These keywords were added by machine and not by the authors. This process is experimental and the keywords may be updated as the learning algorithm improves.
This is a preview of subscription content, log in to check access.