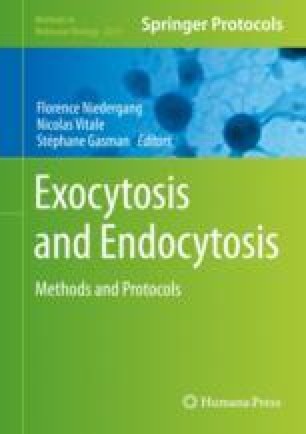 Acrosome reaction is an exocytic process that enables a sperm to penetrate the zona pellucida and fertilize an egg. The process involves the fenestration and vesiculation of the sperm plasma membrane and outer acrosomal membrane, releasing the acrosomal content. Given the importance of the acrosome secretion in fertilization, many different methods have been developed to detect the acrosome reaction of sperm. In this chapter, we describe detailed practical procedures to assess the acrosomal status of human spermatozoa. To do this, we resorted to light optical and epifluorescence microscopy, flow cytometry, and transmission electron microscopy. We also itemize the protocol for real-time measurements of the acrosome reaction by confocal microscopy. Further, we discuss the level of complexity, costs, and the reasons why a researcher should choose each technique.

This chapter is designed to provide the user with sufficient background to measure acrosomal exocytosis in human sperm.

Secretion of neurotransmitters, hormones, and enzymes is a fundamental biological activity of the cell and is achieved by vesicular exocytosis, that is, fusion of secretory vesicles with the plasma membrane. Regulated secretion is a central issue for the specific function of many cells; for instance, mammalian sperm exocytosis is essential for egg fertilization. Fertilization is an essential step in sexual reproduction and consists of a carefully orchestrated series of events that culminate with the generation of a genetically unique zygote [1]. Sperm-egg coat penetration, fusion with the egg’s plasma membrane, and finally, fertilization require the release and exposure of cell components resulting from exocytosis of the unique sperm vesicle [2].

1.1 General Features of a Human Spermatozoon

The spermatozoon is a highly polarized cell constituted by a head and a tail or flagellum. The head externally shows two major domains, the acrosomal region and the post-acrosomal region, separated by the equatorial region. It contains a nucleus and an acrosome, which is a Golgi-derived, lysosome-like, very large electron-dense granule covering about 50% of the nucleus in human sperm [3]. The flagellum contains a 9 + 2 array of microtubules, sheath proteins, and mitochondria, which are spirally arranged in the flagellar midpiece, contributing to power its movement. The head and the tail are joined at the neck. The plasma membrane wraps these structures leaving a little cytoplasm inside. Sperm are incapable of synthesizing proteins or nucleic acids. The only purpose of this terminally differentiated cell is to find, fuse, and deliver their genetic information to the egg (Fig. 1).

The large and flat granule covering half of the nucleus, at its apical part, is not just a bag of soluble enzymes, easily released when the outer acrosomal membrane fuses with the plasma membrane. Its content is electron-opaque, given that it contains an important acrosomal matrix required in fertilization. This matrix is a molecular scaffold assembly that is dismantled by a self-regulated mechanism driven, in part, by proteolysis [4].

The acrosome has all the characteristics attributed to secretory vesicles. It undergoes regulated exocytosis when challenged by physiological stimuli, like progesterone or zona pellucida glycoproteins. Although a continuous membrane surrounds the acrosome granule, the membrane consists of different parts that involve distinct functions. The portion overlying the nucleus is termed the inner acrosomal membrane (IAM) and that underlying the plasma membrane is termed the outer acrosomal membrane (OAM). As stated above, the acrosome contains soluble proteins and an insoluble acrosomal matrix, which have their own patterns of release [5, 6]. Soluble factors are readily released once the exocytosis starts, whereas matrix components remain associated for prolonged periods after exocytosis.

1.2 Exocytosis of the Acrosome: Morphological Changes of the Granule

Upon ejaculation in the female genital tract, millions of sperm ascend the uterus. However, only a few pass through the oviduct to reach the ampulla where the fertilization occurs. During this transit, sperm acquire the ability to fertilize eggs through a process defined as capacitation, which consists of a series of physiological and molecular changes that sperm acquire in the female reproductive tract [7]. These changes pertain to the sperm motility pattern, called “hyperactivation,” [8] and to their ability to undergo sperm granule exocytosis. In the proximity of the egg, progesterone and zona pellucida glycoproteins stimulate mammalian sperm to release the contents of the acrosome granule, a key event in fertilization. Acrosomal exocytosis is an all-or-nothing event that involves the opening of multiple fusion pores between the outer acrosomal membrane and the plasma membrane. This Ca2+-regulated exocytosis is known as “sperm acrosome reaction.” Initially, the importance of exocytosis in mammalian fertilization was unclear, but the phenomenon soon became recognized as a prerequisite for fertilization.

Acrosome reaction involves the prominent rearrangement of membranes in the sperm head. In resting sperm, the majority of cells show an acrosome with electron-dense content and a flat OAM close and parallel to the plasma membrane. Even though, these two membranes do not interact until the sperm is stimulated in the proximity of the mature oocyte to undergo the acrosome reaction. After stimulation with a calcium ionophore or progesterone [9, 10], 30–40% of the sperm show morphologically altered acrosomes. Strikingly, the morphology of the equatorial region of the acrosome is similar to that observed in non-stimulated cells, meaning that this region remains intact. Some acrosomes undergo a simple swelling; however, in many cells, the OAM shows a wavy surface. The protrusions of this membrane occasionally come in contact with the plasma membrane and result in invaginations that are very deep (Figs. 1 and 5). Some cells appear to have vesicles inside the acrosome. Finally, a small group of cells show vesiculated or lost acrosomes, this state is known as reacted. Therefore, in response to exocytosis inducers, a granule first swells to get into contact with the cell plasma membrane, second, it gets attached to the plasma membrane and fuses with it. Finally, it detaches entirely, together with the portion of the plasma membrane that surrounds it. These events are coupled to a complex calcium signaling [11, 12].

In most secretory processes, fusion pore opening and expansion lead to the release of granule contents and the incorporation of the acrosomal membrane into the plasma membrane. In contrast, in mammalian sperm, pore opening and expansion cause the vesiculation of the acrosome. Acrosomal swelling and OAM deformation are important to delineate the membrane domains where pore expansion will lead to the release of hybrid vesicles (Figs. 1 and 5). Reproductive biologists have not yet reached a consensus about crucial issues including this remarkable deformation of the acrosomal granule occurring during the acrosome reaction, but it is thought to be related to lipid remodeling.

1.3 Kinetics of the Acrosome Granule Exocytosis

Most of the knowledge of exocytosis comes from scientific reports on secretion in neurons and neuroendocrine cells. These cells contain several small vesicles that fuse quickly with the plasma membrane. Much less is known about secretion of the large granules stored in exocrine cells, such as pneumocytes and acinar and salivary cells. There is an important correlation between granule size and secretion kinetics [13]. The acrosome reaction is not an exception to this rule: large acrosomal granules exhibit slow (minutes) kinetics of release [10]. Results from several laboratories have shown that the percentage of reacted sperm increases with the time of incubation in the presence of physiological and pharmacological stimuli [14, 15, 16]. The kinetics of the process is measured in minutes and depending on the experimental conditions, it may require about 1 h to reach a plateau. Sosa et al. [10] measured the kinetics of human sperm exocytosis using different approaches. The swelling of the acrosomal granule, which precedes exocytosis, was a slow process (t½ = 13 min). When the swelling was completed, the fusion pore opening occurred rapidly (t½ = 0.2 min). Therefore, the acrosomal swelling is the slowest step and it determines the kinetics of acrosome reaction. After swelling is completed, the efflux of calcium from intracellular stores triggers fusion pore opening and the release of hybrid vesicles in seconds.

1.4 Why Is This Chapter in This Book?

Despite the singular morphological and functional features, all of the fusion-related molecules involved in the acrosome reaction were initially found in somatic cells and implicated in various membrane fusion events. Therefore, sperm share their basic fusion machinery and regulatory components with all other eukaryotic cells, but their differences have to be highlighted [17, 18, 19, 20, 21, 22].

Different cell types carry different secretory granules, such as neuronal, neuroendocrine, endocrine, and exocrine cells. Regulatory exocytosis varies among these cells in terms of cargo, kinetics, probability, and modality of release [12]. To release their contents, secretory vesicles must travel from a cytosolic compartment toward the plasma membrane. Because of its size and shape, the acrosome cannot travel to contact the plasma membrane. The acrosome reaction shares many features with exocytosis in other cell types, however, it differs at the following points:

Ultrapure water must be used to dilute all reagents. Prepare it by purifying deionized water to attain a sensitivity of 18 M Ω cm at 25 °C. Use analytical-grade reagents. Follow all waste disposal regulations when discarding materials.

Prepare a 5 mg/mL PSA stock solution in PBS and store aliquots at −20 °C. PSA working solution: Dilute 1 μL of PSA stock solution in 199 μL of PBS (intact sperm) or HB-EGTA (permeabilized sperm). This dilution must be used directly to stain the samples. Wrap the tubes with aluminum foil to protect from light.

Weigh 4 g PAF and 0.5 g NaOH. Add 90 mL deionized water. Transfer to an Erlenmeyer flask and cover it with aluminum paper. Heat the solution on a magnetic stirrer under fume hood until the solution is transparent (60 °C). Adjust pH to 7. Add 10 mL 1× PBS to reach 100 mL as final volume. Freeze aliquots.

Work under a fume hood and use nitrile gloves. Open a sealed glass ampoule of 0.5 g OsO4 and add it to deionized water. Complete with water to reach a final volume of 25 mL (2% final concentration).

Weigh 1 g uranyl acetate and add to 50 mL of ultrapure water by stirring to reach a final concentration of 2%.

For acrosome reaction assays, spermatozoa must be capacitated (see Note 22).

Follow this protocol for the cells obtained and treated as described in step 6 of Subheading 3.4.

Follow this protocol for the cells obtained and treated as described in Subheadings 3.4 or 3.5.

Once capacitation time has ended, cells can be treated with inhibitors or stimulants of acrosomal exocytosis immediately.

This protocol can be performed from the cells obtained and treated as described in Subheadings 3.4 or 3.5 as stated in Zanetti and Mayorga [9].

The authors thank E. Bocanegra and R. Militello for technical assistance. We specially thank the excellent contribution of P. López, MS from the STAN: ST3371 of TEM and SEM samples preparation, IHEM-CONICET-UNCuyo.