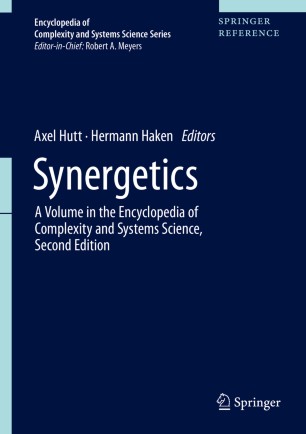 This volume of the “Encyclopedia of Complexity and Systems Science, Second Edition” (ECSS), introduces the fundamental physical and mathematical concepts underlying the theory of complex physical, chemical, and biological systems. Numerous applications illustrate how these concepts explain observed phenomena in our daily lives, which range from spatio-temporal patterns in fluids from atmospheric turbulence in hurricanes and tornadoes to feedback dynamics of laser intensity to structures in cities and rhythms in the brain. The spontaneous formation of well-organized structures out of microscopic system components and their interactions is one of the most fascinating and challenging phenomena for scientists to understand. Biological systems may also exhibit organized structures emanating from interactions of cells and their networks. For instance, underlying structures in the brain emerge as certain mental states, the ability to coordinate movement, or pathologies such as tremor or epileptic seizures. When we try to explain or understand these extremely complex biological phenomena, it is natural to ask whether analogous processes of self-organization may be found in much simpler systems of the inanimate world. In recent decades, it has become increasingly evident that there exist numerous examples in physical and chemical systems in which well-organized spatio-temporal structures arise out of disordered states. As in living organisms, the functioning of these systems can be maintained only by a flux of energy (and matter) through them. Synergetics combines elements from physics and mathematics to explain how a diversity of systems obey the same basic principles. All chapters in this volume have been thoroughly revised and updated from the first edition of ECSS. The second edition also includes new or expanded coverage of such topics as chaotic dynamics in laser systems and neurons, novel insights into the relation of classical chaos and quantum dynamics, and how noise in the brain tunes observed neural activity and controls animal and human behavior.