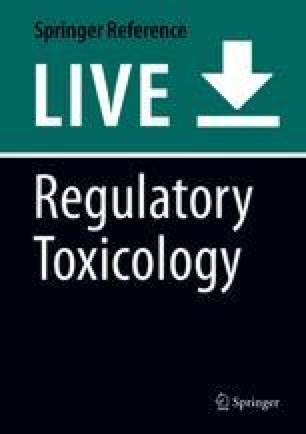 Examination of Acute and Repeated-Dose Toxicity

Toxicity studies have to be performed with chemicals and mixtures subject to chemical legislation or regulation (e.g., pharmaceuticals, pesticides, industrial chemicals, biocides). Before starting a study, a study protocol has to be issued according to accepted testing guidelines e.g., OECD (see references), European Union, US EPA, which exactly lays out the aim and methods of the investigation in detail. The methods have to be fixed by standard operating procedures (SOPs) to reduce as much as possible the systematic error rate and to ensure the transparency of the procedures and the resulting data (Good Laboratory Practice, GLP). The basic study types are shown schematically in Fig. 1. Acute studies involve administration of a single oral dose, 4 h inhalation exposure, or 24 h of dermal exposure.

Repeated-dose studies are conducted either by continuous exposure via feed or drinking water (oral), daily gavage administration (oral), or daily exposure via inhalation or dermal contact for 6 h/day.

Acute toxicity studies aim at the identification of lethal doses or concentrations for the purpose of classification and labelling. Therefore, only a limited set of parameters is typically investigated: survival, clinical signs of toxicity, weekly body weight, and gross necropsy.

Where applicable, relevant statistical methods have to be employed to inform on the statistical significance of any treatment-related changes that are observed.

The following experimental conditions have to be recorded: selection of an accepted species including the strain, starting weight/age, food/water quality and source, quality of substance (purity grade, homogeneity, stability in the application medium), temperature, air humidity/exchange/pressure and duration of lightning in the stall, size of cages/inhalation chambers, litter, hygiene management, use of validated methods and appropriate material, as well as follow-up of historical control data. The results have to be listed in the report as individual values and deposited as raw data – signed and dated – in an archive certified by GLP. Study protocol, test procedure, as well as the transfer of the results to the final report have to be proofed and certified by a designated and independent quality assurance unit. According to animal welfare regulations, animal studies which are not requested by authorities are subject to approval; in-vitro studies are notifiable only.

The aim of acute toxicity evaluation is to estimate a dose or concentration that would lead to an expected 50% mortality of the exposed animals.

Dermal application is performed moistened or as a pasty related to the physical condition (liquid/solid). The skin is treated under semi-occlusive coverage over 24 h. Rats or rabbits are the preferred species for the dermal route of exposure.

Testing via inhalation may employ exposure to dusts, liquid aerosols, or gases/vapors, depending on the physical properties of the test substance. Rats are typically used for acute inhalation studies. To determine the hazard/risk potential, the “nose-only” system is preferred where the animals are exposed exclusively via the respiratory tract (nose/mouth) over 4 h. This ensures that potential effects can be reliably ascribed to the intended application route and not, e.g., to oral ingestion of test material deposited on the coat from grooming behavior. After the single application, a 14-day post-application observation period follows which has to be enlarged if symptoms still continue. During this period progressing symptoms are protocolled related to intensity and start/end time in minutes/hours/days. Time of death of dead/moribund killed animals is protocolled in addition. Thus, conclusions can be made about symptoms and death related to the latency. Short latency periods hint to a substance, longer-lasting periods to an accumulated impact. At the end of the observation period, surviving animals are anesthetized, dissected, and assessed macroscopically (anatomic-pathological; dead animals directly). As further parameter, body weight has to be determined before treatment, weekly post-application, and before section. Based on the results (type, intensity, duration of symptoms, body weight gain), the acute toxic profile of a substance can be gained. Based on the number of dead animals/groups, the LD50 (median lethal dose, i.e., dose where 50% of the animals die) can be calculated according to Litchfield and Wilcoxon (Table 1), for example.
Table 1

The Acute Toxic Class (ATC) Method (OECD guideline 423, see Reference) has largely replaced the conventional LD50 testing shown in Table 1. This method employs the use of fewer animals than the conventional method. Depending on the number of humanely killed or dead animals, the test procedure follows the indicated arrows. The scheme in Fig. 2 shows the procedure when the highest dose is chosen as starting point. This is appropriate if low toxicity of the substance is expected, e.g., from structurally related substances with known toxicity. Selection of the correct starting dose is essential for using the minimum possible number of animals.

Instead of distinct LD50/LC50 values, ATCs are obtained which are directly related to existing national/international classification systems (WHO, EU). The ATC method allows the derivation of LD50/LC50 cut-off values that can be used as surrogates for defined LD50/LC50 values.

The aim of the chronic toxicity studies is the compilation of the profile of a substance after repeated intake of low doses over a longer time period. Three categories can be differentiated: subacute (28 day), subchronic (90 day), as well as chronic (52 weeks and more) in two different mammalian species (e.g., rat/dog). The examination of two clearly different mammalian species reduces false-negative findings caused by potential species specificity, but increases the percentage of false-positive findings. Anyhow, not all relevant effects/ findings can be detected adequately in one species considering sensitivity for man (e.g., teratogenicity of thalidomide). All repeated application studies comprise in general four dose groups (control-, low-, medium-, as well as highest-dose group) whose number can be increased if necessary. The dose range should be spread widely and derived in an algorithmic manner. Ideally, the low dose should show no effects; the medium dose exerts no or slight effects and the highest dose should produce toxicity, but no death or severe suffering. Impaired body weight gain, reduced by at least 10% compared to controls, is typically considered an indication of sufficient toxicity at the top dose.

The subacute study is intended to identify potential target organs and to support dose-range finding for longer-term studies.

Besides the investigation of minimum parameters required by the relevant testing guideline, a high-performance ratio should be pursued to reduce the overall number of animal testing for a given substance. Standard investigations need only small amounts of biological material, so that further investigations can be conducted, e.g., into immunotoxicity (thymus, spleen, lymph nodes, Peyer-plaques) or phase-I and -II enzymes in the liver, or a liver foci test as a short-term carcinogenicity test. Such additional investigations can provide valuable information on the toxicological profile and indicate where special attention is needed in the longer-lasting studies (subchronic/chronic) to avoid additional dose groups or even repetition of entire studies.

A further important function of the subacute study is the dose-range finding for subsequent studies (subchronic/chronic). Based on the large spread of the dose range, one can identify tentative NOELs (no observed effect levels) as well as clear, non-toxic/low toxic doses to determine the profile. In case of doubt, the dose range has to be enlarged.

The reversibility of findings can be studied by adding satellite (recovery) groups. The animals of the satellite group are not treated with the test substance after the application period, whereas all other activities continue over a variable time period in general over 4 weeks. (Non-)recovery of organ functions can be detected as hint to (non-)intact repair mechanisms or adaptation capacities of the organs. Related to the target, the proof of reversibility can be useful also in subacute dermal as well as inhalation studies.

Based on the results of the subacute studies, the performance of subchronic/chronic studies is more or less comparable to that of the subacute studies. The basic difference is the treatment period and the number of animals per dose group (subchronic 13 weeks, 10–20 animals/dose/sex); chronic from 26 weeks to 52 weeks or 105 weeks as carcinogenicity studies on rats and mice (50–70 animals/dose/sex). For non-rodents (e.g., dog) at least four animals per dose group per sex are used.

The longer treatment period allows detecting effects which need a certain latency period to develop, for example, tumors or secondary effects based on primary impact (idiosyncrasy, late reaction, proliferation of tissue due to permanent irritation). Those effects complete the toxicological profile after repeated application. A typical course (data collection) of a combined chronic toxicity/carcinogenicity study in rats is shown in Table 2.
Table 2

aNumber of days which are used to calculate the food intake

Besides the determination of the toxicological profile, chronic studies are used to define a NOAEL (no observed adverse effect level). Considering the definition of NOAELs, there is a prominent influence of the dose range finding on the effect range (profile) as well as the nontoxic range. The term “adverse” is interpreted differently under various regulatory regimes and this interpretation may also change over time. Are transient increases of hepatic phase-I and -II enzyme activities “adverse,” or do they reflect an adaptive physiological reaction of the organ? Which percentage of cholinesterase activity inhibition due to an organophosphate is considered a toxicological relevant effect and in consequence to be seen as “adverse”? Effects can show a statistical significance without having any biological/toxicological relevance and should therefore not be considered “adverse.” In general the NOAELs of subacute, subchronic, and chronic studies serve as point of departure for limit values like ADI (acceptable daily intake), AOEL (acceptable operator exposure level), and others, which are crucial for human health risk assessment. Severe toxic effects pertaining to teratogenicity, genotoxicity, or carcinogenicity can lead to an increase of the safety factor (SF), which accordingly lowers the respective limit value. The treatment period has to be seen in analogy to the expected duration of human exposure, e.g., whether it is incidental (acute) seasonal (subacute/subchronic) or lifelong (chronic).